Press Brake is a widely used bending machine, which has already been hydraulicized. As an important equipment for sheet metal processing, the sheet metal press brake plays its irreplaceable role and plays a decisive role in the quality, processing efficiency and accuracy of the product.

Generally, the press brake is an upper-piston press, which is composed of a frame, a slider, a hydraulic system, a front pallet, a backstop, a mold, and an electrical system.

Figure as follow shows the hydraulic system of the cnc press brake machine. Every time you perform a bending action, the bending cycle of the typical bending process of the beam is moved. include: 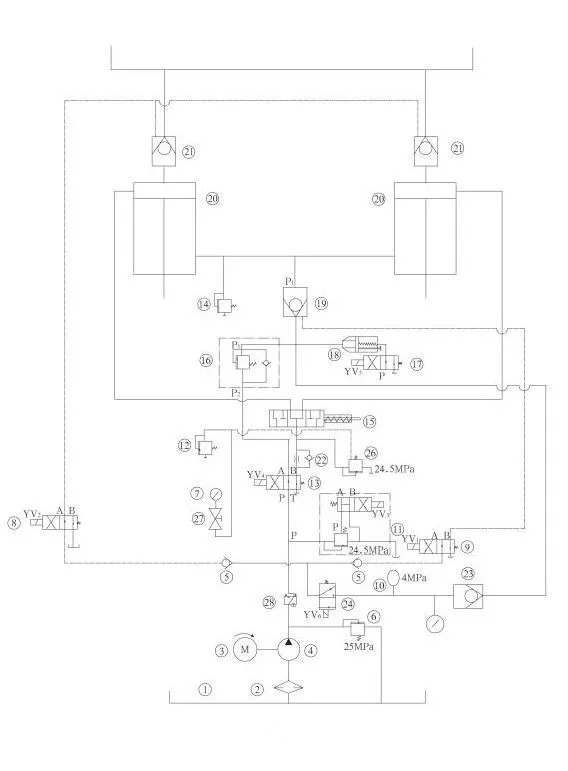 The motor rotates in the direction marked by the pump arrow, that is, clockwise, driving the axial plunger pump. The oil enters the valve plate and the electromagnetic overflow valve back to the tank through the pipeline. When the 19th valve is closed, the lower chamber of the 20th cylinder The oil keeps the slider at a fixed position.

The rapid downward movement of the cnc press brake for sale generates movement through the weight of the press brake beam and various accessories and the pressure of the oil. In this process, the rod-less cavity of the hydraulic cylinder is fed with oil through the filling valve, and the rod cavity will generate back pressure and the oil will return quickly. The fast-forward movement starts from the top dead center, and after a short period of deceleration, the slider slows down at a certain distance close to the bending plate.