30t hydraulic press brake in the use of seven dangerous phenomenon, must cause high attention

The main part and structure of 30t hydraulic press brake

Description of the main part and structure of CNC bending machine:

2, the table part: operated by the button box, so that the motor drives the stopper frame to move before and after, and the numerical control system to control the distance of movement, its minimum reading is 0.01 mm (there are travel switch limit before and after position).

3, synchronization system: the machine is composed of torsion shaft, swing arm, joint bearing and other mechanical synchronization mechanism, simple structure, stable and reliable performance, high synchronization accuracy. The mechanical block is adjusted by the motor and the numerical control system controls the value. 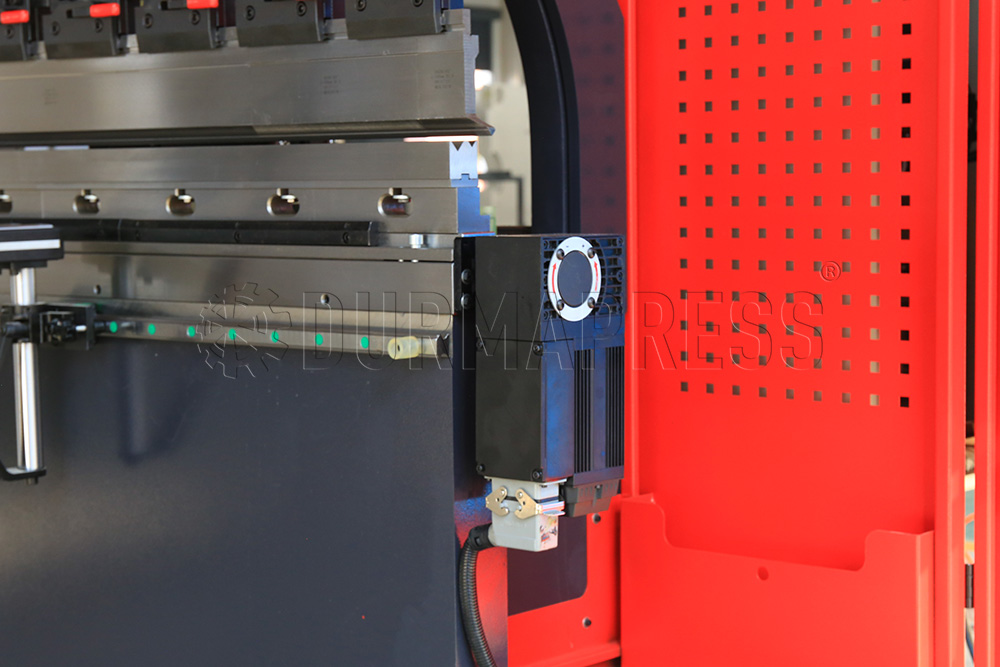 Using crystal glass handicraft carving in part to light has strong reflection, refraction, and the blank part of the light has better performance of optical principle, fully by the micro control circuit according to the principle of three base color palette, each control several kinds of color the lamp, mixed color on the "eagle" icon, change out of a variety of gorgeous color, Thus, the white interior carving image of the tableland presents a colorful and dazzling effect.

These problems are often encountered by us, but often overlooked, and the bigger problems arise, so it is worth noticing. Both in China's relevant national standards, or in the European Union CE certification of mechanical and electrical products are mandatory implementation of the important content. Make it clear that "safety of people and property, consistency of control response, and ease of maintenance" are "not desirable to sacrifice these basics for high performance." (IEC204.1, GB5226.1) but in the actual repair and transformation work, there are still the following phenomena:

Symptom 1: Not a single power supply

Some CNC bending machine equipment to increase some institutions, because of the wiring is convenient, or associated with the action of other equipment, the new institutions of electricity is not from the power of the equipment to cut off the switch below the wire, and the other lead, thus violating the "mechanical electrical equipment connected to a single power supply" standard provisions (GB/T5226.1-5.1). In an emergency, cutting the power switch on the device cannot cut off all the power supply of the device, which is a potential hazard to personnel. 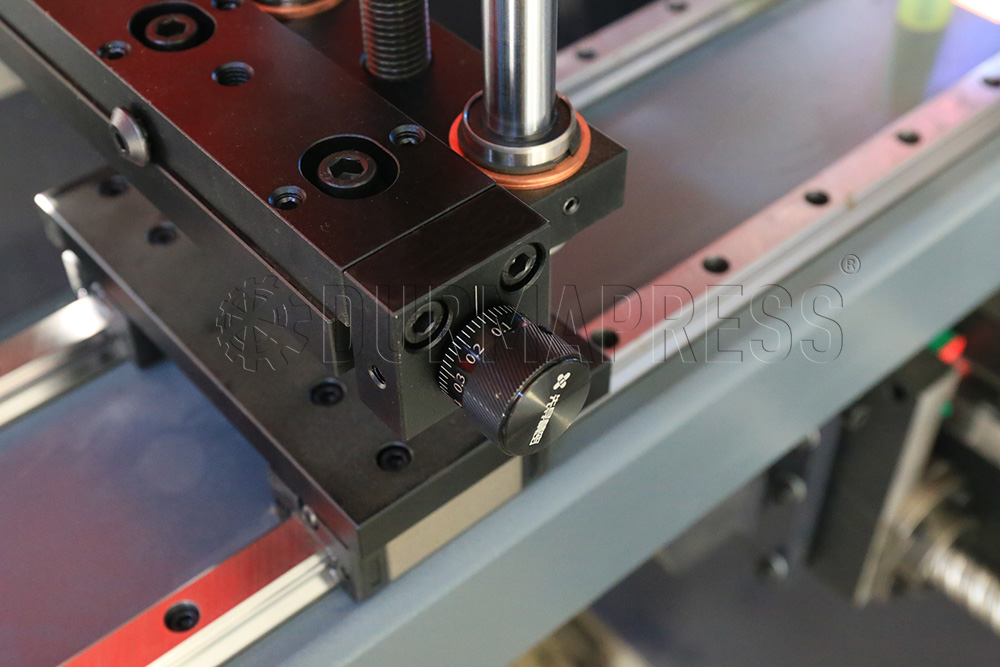 Symptom 2: The middle line is improperly connected to the PE

Just take China's national standard GB/T5226.1 as an example, in which 5.1 clearly stipulates, "Inside electrical equipment, the center line and protection grounding circuit should not be connected. The PEN terminal should not be used inside the mechanical cabinet." We have encountered more than one case of machine tool after transformation, due to the increase of components, AC220V power supply is needed, then directly connect a phase of three-phase 380V and the PE grounding end of the machine tool to form AC220V, after adding three-phase electrical components, the lead line is connected to the PE terminal. Obviously, if somewhere is disconnected due to mechanical failure, then the device becomes an electrified body with 220VAC voltage to the ground. The equipment at this time can cause direct electric shock injury to personnel.

In general, CNC bending machine tool manufacturers according to the national standards, "only in the user consent can use the middle line. Metal processing wechat, good content, worth paying attention to. The use of neutral wires shall be clearly indicated in the mechanical technical documents (installation drawings and circuit drawings), and a single insulated terminal marked N shall be provided for the neutral wires. Therefore, the machine tool transformation must not figure out to save trouble disorderly connection to PE, to ensure the safety of production and maintenance personnel.

Symptom 3: The electrical device is not protected

In the national standard GB/T5226.1, it is required to have thermal protection measures for motors with continuous operation of 0.5KW and above. The failure of heat accumulation is an important reason for motor burn out. In the process of machine tool equipment transformation, the use of "time-current" protection device does not match the motor, that is, when the time constant of the winding of the protection device and the protected device differs greatly from each other, it often cannot play an effective protection role. We see in the actual work, maintenance, transformation of machine tools often exist in this aspect of the problem.

Symptom 4: The protection level of the electrical cabinet is insufficient

We have been entrusted to carry out the acceptance of a certain equipment after the transformation. The electrical cabinet of the equipment is about one person high (about 1800MM) and the width of the single door is about 800mm, without the door switch. Anyone can open the cabinet door and enter the cabinet without using any tools. The protection level of the devices in the cabinet is IP1.1. It is obvious that the electrical cabinet structure of the equipment violates the following provisions in GB/T5226.1-6.2.1: "The enclosure is allowed to be opened only under the following conditions: a) the enclosure must be opened by a skilled technician or trainee using a key or tool, and it may not be appropriate to open the electrical equipment during operation.

B) Cut off live parts inside the shell before opening it; This technical requirement can be realized by interlocking the door with the cut-off switch (such as the power cut-off switch), so that the door can only be opened after the cut-off switch is opened, and the door can only be closed after the switch. C) only when all live parts have a protection class of at least IP2X or IPXXB by direct electric shock (see IEC529) is the case allowed to be opened without keys or tools and without cutting live parts." Metal processing wechat, good content, worth paying attention to. Therefore, the protection level of the equipment cabinet is far from reaching "can only allow skilled technical personnel to enter, and comply with special technical requirements (IEC364─4─41IEC─4─47IEC439─1). The hidden security risks buried here can be imagined.

The electrical cabinet ventilation of CNC bending machine tools and other equipment has long been recognized in the international "positive pressure" mode, but it has not been realized in some machine tool transformation. We once encountered a domestic machine tool with negative pressure ventilation, and the cutting fluid on the tool rest was fed into the electric cabinet through a snakeskin hose. The moisture in the cable trench, the dust during cutting and so on all enter into the electric cabinet along the channels and gaps. The machine tool used for about a year or so, the circuit board in the electrical cabinet and the electrical parts on a layer of dirt, obvious water vapor (condensation) traces. The machine failures frequently affect the normal production. In GB5226.1-13.3 clearly stipulates that "the shell of the control device should generally have no less than IP54 protection grade (see IEC529)." It follows that there is a price to be paid for not following standards. 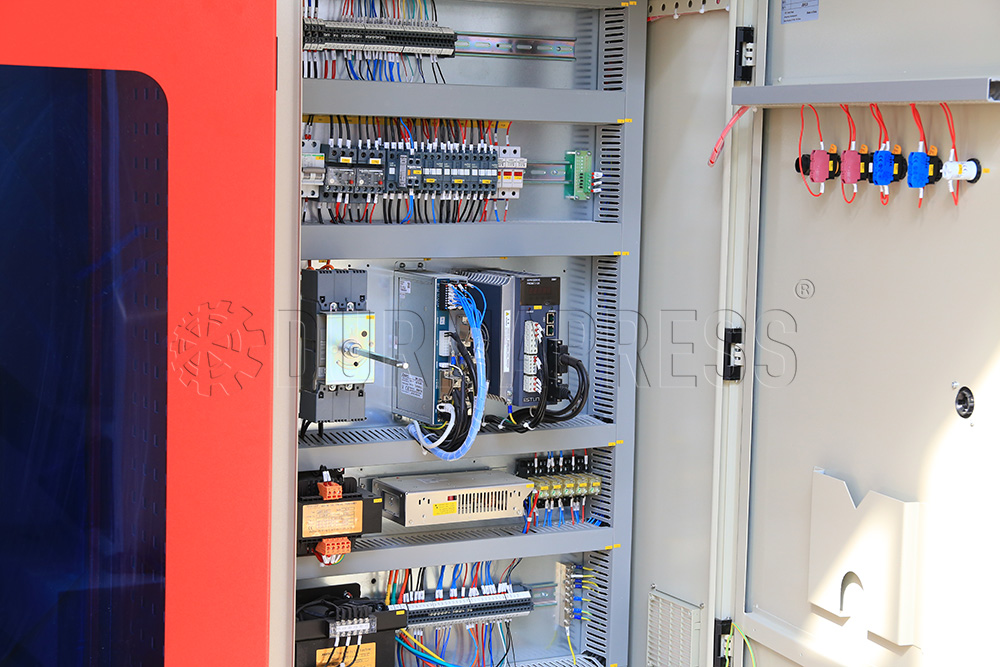 When there is no protective door interlocking function for the equipment with splashing danger, there is no two-hand control mode for the operation only when the operator's hands have left the dangerous operation area. When the lack of phase caused by electrical appliances in the burned without setting three-phase linkage circuit breaker and respectively using three road insurance, are directly constitute the harm to personnel and property.

Symptom 6: The control line is hidden

As we all know, for the safety of personnel and equipment involved in this kind of signal, such as emergency stop signal, overrange signal, alarm signal, etc., should be "with power off the way to stop" and "cut off all the power conductor controlled device" (GB/T5226.1-9.4.2.1) we have encountered a private enterprise design modified CNC bending machine, Limit switch used normally open contact, that is, be in normal working conditions when the machine is not distance line for the "disconnect" (low level), when the moving parts distance to press the switch on, closed circuit (high level), the machine tool in the process of debugging, maintenance personnel as the measuring circuit, pulled the plug after the failed to plug in, result in test line is always in a normally open state, The controller confirms that the machine tool is "normal", so that the screw supporting bearing seat is damaged. It can be imagined that if the movement chain line is disconnected due to mechanical reasons during the user's use, who should bear the property loss or personnel injury caused by it? "One side of relay coil grounding" in control circuit has long been considered as an effective safety measure to avoid fault misoperation. However, in some machine tools, both sides of the relay coil are provided with control contacts or one end is connected to the power supply, the other end of the contact point is very common. Because the line is put on and go down on the machine tool equipment, if a place is short-circuited to the ground due to mechanical wear and insulation failure, the relay misoperation, the consequences are unimaginable. Metal processing wechat, good content, worth paying attention to. It is worth mentioning that some designers of electrical transformation, for the convenience of the diagram, often design the control output end into the direct drive relay diagram in the form of open collector, but at the same time, it also hides the hidden danger of accidents.

Some modified machine tools and equipment failed to give corresponding warning marks according to the requirements of GB5226.1-18.2. Often in the revised technical documents are not well explained, only in the training of oral warning to operators.