1. The harm of high oil temperature in the system

1. The viscosity of hydraulic oil decreases

The viscosity of CNC bending machine oil changes with temperature. If the temperature is too high, the viscosity of hydraulic oil will decrease, which will cause leakage and reduce volumetric efficiency. At the same time, the lubrication performance deteriorates, which leads to increased wear and even sintering.

2. The parts of the Plate Bending Machine expand due to overheating

Because the linear expansion coefficient, heating and heat dissipation conditions of each component of the system are not the same, the thermal expansion of each part is not exactly the same, and the resulting deformation is also different, which is likely to destroy the original normal matching gap of the relative moving parts, resulting in The frictional resistance increases, making the valve core easy to jam. At the same time, the high temperature thins the lubricating oil film and increases mechanical wear, causing the precision mating surfaces in the components to fail or even become scrap due to premature wear.

3. The oxidation stability and thermal stability of the oil are destroyed

Oxidation stability: refers to the ability of liquids to resist chemical reactions with oxygenates (especially air).

Thermal stability: It is the ability of a liquid to resist chemical reactions at high temperatures.

In the process of use, the oil is oxidized due to the influence of heat, oxygen and metal materials, which causes the oil to deteriorate. When the temperature and pressure increase, the oxidation speed will increase, and the substances produced by oxidation will increase the corrosiveness to metals.

5. It is easy to produce impurities, and the oil temperature is too high, which is easy to vaporize, so that the water evaporates, and the components are easy to cause cavitation. The oil oxidizes to form colloidal deposits, which block the filter element and the damping holes in the hydraulic valve and make the system work abnormally.

1. The oil type and viscosity grade do not meet the requirements.

3. The liquid level in the fuel tank is too low

If the amount of oil in the oil tank is too small, the hydraulic system will not have enough flow to take away the heat generated in the system, causing the oil temperature to rise.

4. Air is mixed into the system

5.The oil filter is blocked.

3. During the initial operation of the equipment, oil should be injected into the oil hole of the hydraulic pump, and the coupling between the hydraulic pump and the motor should be rotated manually for a few laps, so that the pump is filled with oil, so as not to inhale air or rotate at high speed due to lack of lubrication. Heat is generated in the state, which will increase the oil temperature and even wear the components.

4. Choose an appropriate cooler, the choice of cooler is related to power.

5. Regularly replace the filter element to ensure that the oil is clean and the oil path is unblocked.

Hydraulic technology is developing in the direction of high pressure, high frequency, rapid response, guidance, etc. The requirements for the medium are getting higher and higher, and troubleshooting is more difficult. However, 80% of the failures of the hydraulic system are directly related to the hydraulic medium. Therefore, the selection of hydraulic media and daily maintenance are very important. Only on this basis can the hydraulic system run more stably and have a longer service life. 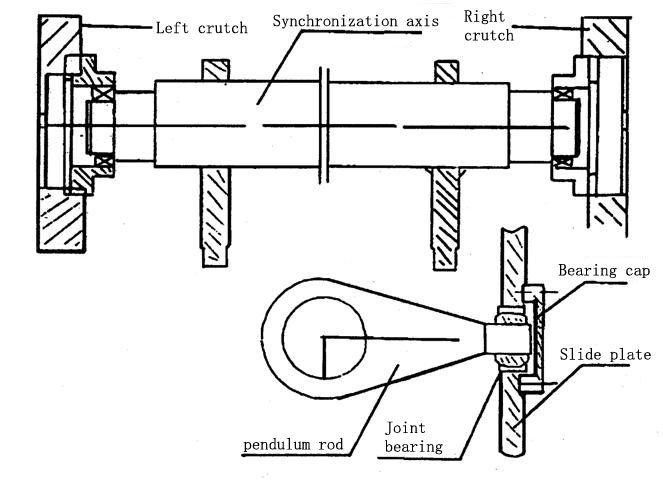 The shelf of back gauge range

The machine has the electrically operated back gauge range disposition, press work table's button to be possible to cause he shuttle and to note the data by counter. The machine’s hand wheel can satisfy the gauge range position. The shelf of gauge range can go high and down, first, loosen the bolt of fluctuation lead screw nut and upper fasten-nut, in order to round the upper nut, the  lead screw go high-and-down can make the back gauge range go high-and-down., after adjustment, fasten it according to the former way.

The adjustment of slide stroke

The adjustment of slide stroke achieves through the control cylinder piston travel, put the   lead screw and nut of tailor-made trapeziform screw thread into the two oil cylinder, change the position to change the piston rod’s interval. Load adjusting knob in the electric appliance box, through the control in cylinder electric motor’s back and forth revolution to realize.

Attention: The slide plate can be adjusted in the upper end-point, the data-sheep in the front of it shows, certainly cannot the over-travel adjustment avoid damaging electrical machinery. 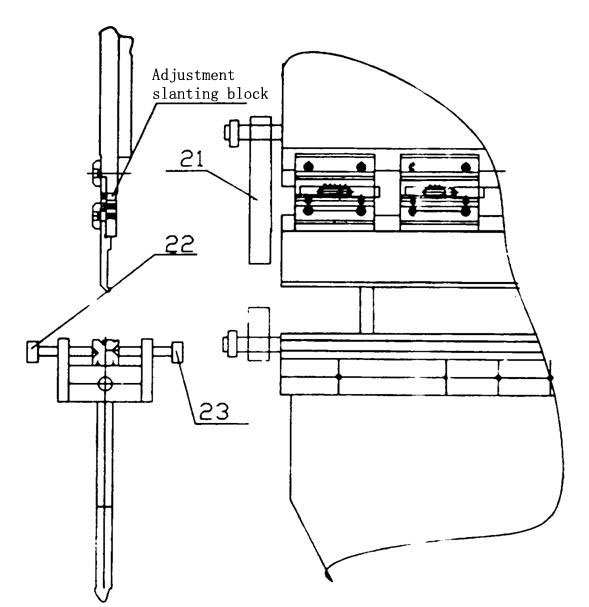 The top die installs on the slide, depending on pressure board to fix it. (Has the different length partition top die, according to working piece’s request to composite certain width, bend seal frame shape components for user special orders).

The nether mould installs the worktable by adjustment bolt, use the handle (22) (23) to make packing block shuttle with the nether mould, in order to aim at the center of top die.

The flying rings (21) used as lifting nether mould, hang in nether mould bolt or put into the toolbox.

6.THE ELECTRICAL SYSTEM OF MACHINE

1. Put the power supply of three-phase AC 380v,50hz and ground electrode into the inside of electric.

3. After operating several minuets of pump electrical machine, adjust pressure holded time relay KT48 to the small position. let SA3 circumvolve to “The spot move” , step on the button “down”

Then the slide makes the movement of “quick down”. As a result of time relay’s effect, the slide shall stop after moving down a distance, make it go on moving down, need to loosen foot switch to step on again, KT48  can adjust pressure holded time , step on the foot switch“up”,the slide stop at dead center.