Question: Why is a press brake called a press brake? Why not a sheet metal bender or a metal former? Does it have to do with the old flywheel on mechanical brakes? The flywheel had a brake, like that on a car, allowing me to stop the motion of the ram before the forming of the sheet or plate began, or to slow the ram’s speed during forming. A press brake amounted to a press with a brake on it. I’ve had the privilege of spending a few years with one, and for many years I thought that was why the machine’s name is what it is, but I’m not sure that’s correct. It certainly doesn’t sound right, considering the word “brake” has been used to describe sheet metal bending long before powered machines came along. And press break can’t be correct, because nothing is broken or shattered.

Answer: Having pondered the subject for many years myself, I decided to do some research. In doing so I have the answer and a bit of history to relay as well. Let’s begin with how sheet metal initially was shaped and the tools that were used to accomplish the task.

From T-stakes to Cornice Brakes

Before machines came along, if someone wanted to bend sheet metal they’d attach an appropriately sized piece of sheet metal to a mold or a 3D scale model of the desired sheet metal shape; anvil; dolly; or even a forming bag, which was filled with sand or lead shot.

Using a T-stake, ball peen hammer, a lead strap called a slapper, and tools called spoons, skilled tradespeople pounded the sheet metal into the desired shape, like into the shape of a breastplate for a suit of armor. It was a very manual operation, and it’s still performed today in many autobody repair and art fabrication shops.

A press brake is a machine pressing tool for bending sheet and plate material, most commonly sheet metal.It forms predetermined bends by clamping the workpiece between a matching punch and die.[2]

The first “brake” as we know it was the cornice brake patented in 1882. It relied on a manually operated leaf that forced a clamped piece of sheet metal to be bent in a straight line. Over time these have evolved into the machines we know today as leaf brakes, box and pan brakes, and folding machines.

While these newer versions are fast, efficient, and beautiful in their own right, they don’t match the beauty of the original machine. Why do I say this? It is because modern machines are not produced using hand-worked cast-iron components attached to finely worked and finished pieces of oak.

Still, whether it’s a mechanical press brake or a state-of-the-art electric brake, how did these machines come to be called a press brake? To answer that question, we’ll need to delve into some etymology.

As verbs, broke, brake, broke, and breaking all come from archaic terms predating the year 900, and they all share the same origin or root. In Old English it was brecan; in Middle English it was breken; in Dutch it was broken; in German it was brechen; and in Gothic terms it was brikan. In French, brac or bras meant a lever, a handle, or arm, and this influenced how the term “brake” evolved into its current form.

A press brake doesn’t “step on the brakes” to bend, so why is it called a press brake? A brief history of a few words reveals the answer. Photo courtesy of Getty Images.

The Old English brecan evolved to become break, meaning to violently divide solid objects into parts or fragments, or to destroy. Moreover, several centuries ago the past participle of “brake” was “broken.” All this is to say that when you look at the etymology, “break” and “brake” are closely related.

The term “brake,” as used in modern sheet metal fabrication, comes from the Middle English verb breken, or break, which meant to bend, change direction, or deflect. You could also “break” when you drew back the string of a bow to shoot an arrow. You could even break a beam of light by deflecting it with a mirror.

Who Put the ‘Presse’ in Press Brake?

We now know where the term “brake” comes from, so what about the press? Of course, there are other definitions unrelated to our current topic, such as journalism or publishing. This aside, where does the word “press”—describing the machines we know today—come from?

Around 1300, “presse” was used as a noun that meant “to crush or to crowd.” By the late 14th century, “press” had become a device for pressing clothes or for squeezing juice from grapes and olives.

From this, “press” evolved to mean a machine or mechanism that applies force by squeezing. In a fabricator’s application, the punches and dies can be referred to as the “presses” that exert force on the sheet metal and cause it to bend.

To Bend, to Brake

So there it is. The verb “brake,” as used in sheet metal shops, comes from a Middle English verb that meant “to bend.” In modern use, a brake is a machine that bends. Marry that with a modifier that describes what actuates the machine, what tools are used to form the workpiece, or what types of bends the machine produces, and you get our modern names for a variety of sheet metal and plate bending machines.

A cornice brake (named for the cornices it can produce) and its modern leaf brake cousin use an upward-swinging leaf, or apron, to actuate the bend. A box and pan brake, also called a finger brake, performs the types of bends needed to form boxes and pans by forming sheet metal around segmented fingers attached to the upper jaw of the machine. And finally, in the press brake, the press (with its punches and dies) actuates the braking (bending).

The 15th century definition of brake was “an instrument for crushing or pounding.” Ultimately the term “brake” became synonymous with “machine,” derived over time from machines used to crush grain and plant fibers. So in its simplest form, a “pressing machine” and a “press brake” are one in the same. 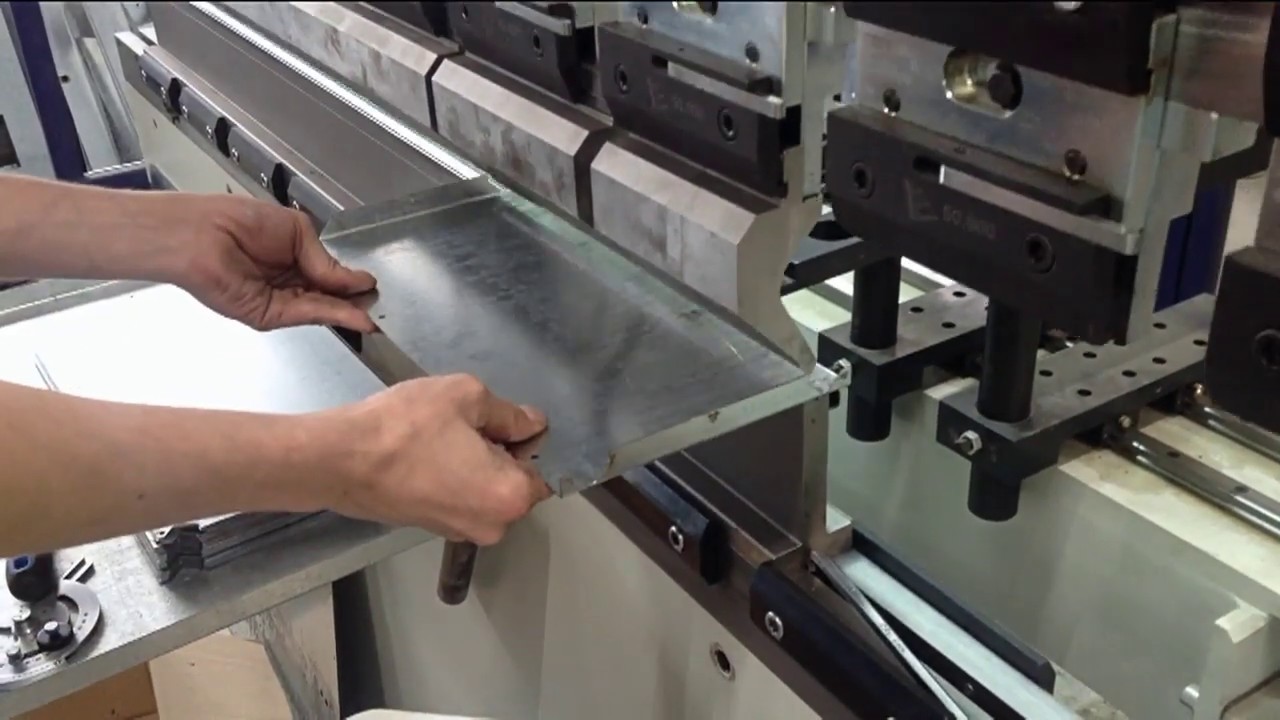 After know the name origins , Let us go to know how to use and how to choose The CNC Press Brake .

Typically, two C-frames form the sides of the press brake, connected to a table at the bottom and on a movable beam at the top. The bottom tool is mounted on the table, with the top tool mounted on the upper beam.[3]

A brake can be described by basic parameters, such as the force or tonnage and the working length.

Additional parameters include the stroke length, the distance between the frame uprights or side housings, distance to the back gauge, and work height. The upper beam usually operates at a speed ranging from 1 to 15 mm/s.[3]

There are several types of brakes as described by the means of applying force: mechanical, pneumatic, hydraulic, and servo-electric.

In a mechanical press, energy is added to a flywheel with an electric motor. A clutch engages the flywheel to power a crank mechanism that moves the ram vertically. Accuracy and speed are two advantages of the mechanical press.[4]

Hydraulic presses operate by means of two synchronized hydraulic cylinders on the C-frames moving the upper beam.Servo-electric brakes use a servo-motor to drive a ballscrew or belt drive to exert tonnage on the ram.

Until the 1950s, mechanical brakes dominated the world market. The advent of better hydraulics and computer controls have led to hydraulic machines being the most popular.

Pneumatic and servo-electric machines are typically used in lower tonnage applications. Hydraulic brakes produce accurate high quality products, are reliable, use little energy and are safer because, unlike flywheel-driven presses, the motion of the ram can be easily stopped at any time in response to a safety device, e.g. a light curtain or other presence sensing device.

Recent improvements are mainly in the control and a device called a backgauge. A back gauge is a device that can be used to accurately position a piece of metal so that the brake puts the bend in the correct place. Furthermore, the back gauge can be programmed to move between bends to repeatedly make complex parts. Early brakes relied on the tooling to determine the bend angle of the bend. The animation to the right shows the operation of the back gauge, setting the distance from the edge of the material or previous bend to the center of the die.

Press brakes often include multi-axis computer-controlled back gauges. Optical sensors allow operators to make adjustments during the bending process. These sensors send real-time data about the bending angle in the bend cycle to machine controls that adjust process parameters.[3]

Press brakes can be used for many different forming jobs with the right die design.

Types of dies include:

V-dies—the most common type of die. The bottom dies can be made with different-sized die openings to handle a variety of materials and bend angles.

Rotary bending dies—a cylindrical shape with an 88-degree V-notch cut along its axis is seated in the "saddle" of the punch. The die is an anvil over which the rocker bends the sheet.

Acute angle (air-bending) dies—used in air bending, these can actually be used to produce acute, 90 degree, and obtuse angles by varying how deeply the punch enters the die by adjusting the ram.

Offset dies—a combination punch and die set that bends two angles in one stroke to produce a Z shape.

Seaming dies—There are a number of ways to build dies to produce seams in sheets and tubes.

Radius dies—A radiussed bend can be produced by a rounded punch. The bottom die may be a V-die or may include a spring pad or rubber pad to form the bottom of the die.

Beading dies—A bead or a "stopped rib" may be a feature that stiffens the resulting part. The punch has a rounded head with flat shoulders on each side of the bead. The bottom die is the inverse of the punch.

Curling dies—The die forms a curled or coiled edge on the sheet.

Tube- and pipe-forming dies—a first operation bends the edges of the sheet to make the piece roll up. Then a die similar to a curling die causes the tube to be formed. Larger tubes are formed over a mandrel.

Four-way die blocks—A single die block may have a V machined into each of four sides for ease of changeover of small jobs.

Channel-forming dies—A punch can be pressed into a die to form two angles at the bottom of the sheet, forming an angular channel.

U-bend dies—Similar to channel forming, but with a rounded bottom. Spring back may be a problem and a means may need to be provided for countering it.

Box-forming dies—While a box may be formed by simple angle bends on each side, the different side lengths of a rectangular box must be accommodated by building the punch in sections. The punch also needs to be high enough to accommodate the height of the resulting box's sides.

Corrugating dies—Such dies have a wavy surface and may involve spring-loaded punch elements.

Multiple-bend dies—A die set may be built in the shape of the desired profile and form several bends on a single stroke of the press.

Rocker-type dies—A rocker insert in the punch may allow for some side-to-side motion, in addition to the up-and-down motion of the press.